I have tried to start this report many times but it’s been difficult keeping up with all the events:

We adjourned on time Friday May 18th at 6pm after a very strange work- horse week, working until midnight several nights to advance bills.  None of us could figure out the leadership’s strategy and had no clue of their bill priorities.  We were on edge not knowing what bill was coming up next, often with just 30 seconds warning. 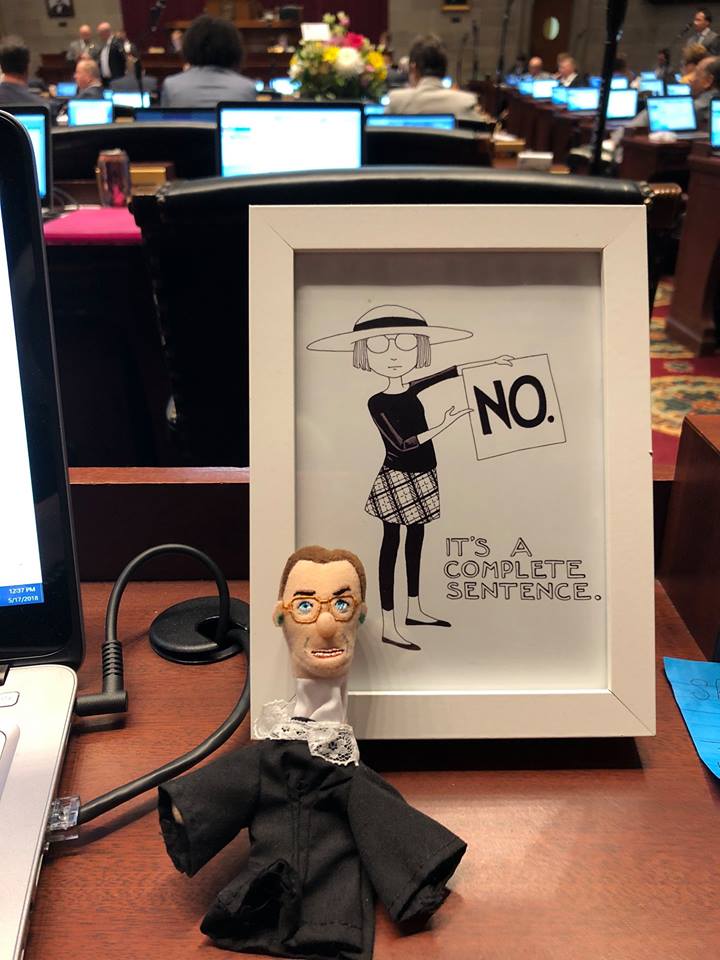 Great way to pass policy, right?  Sleep deprivation, amended bills back and forth from the Senate and votes coming at us every minute – most of us had no clue what bills contained.  We leaned heavily on our colleagues & our debate slowing down the clock to allow us to deciper what amendments were added to the mountain of bills. 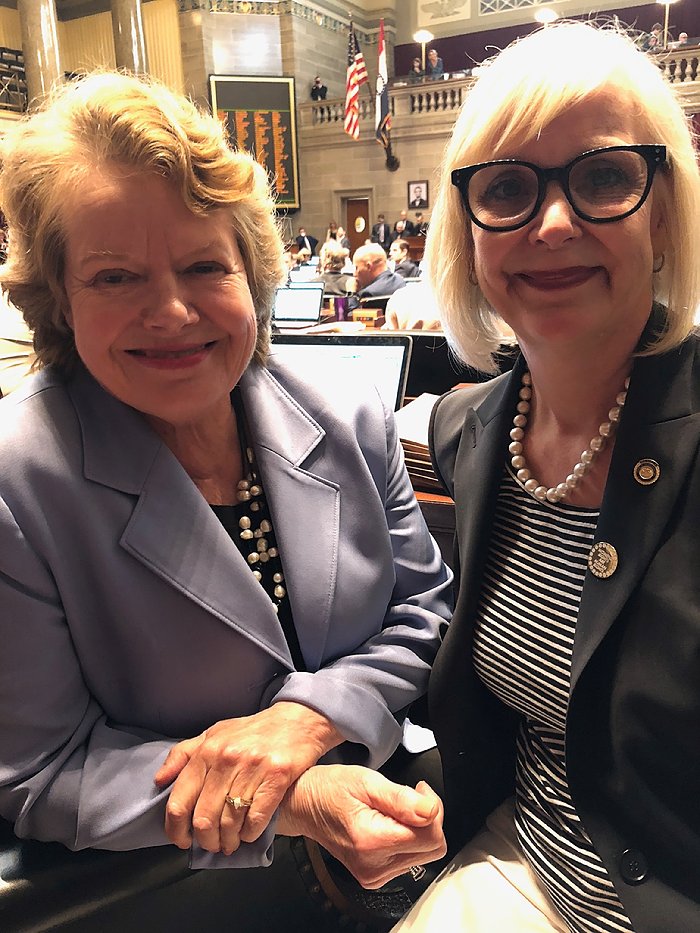 At our desks, Rep. Judy Morgan and me.

I leaned on my seat mate and close friend, Rep. Judy Morgan (D-Kansas City) who serves on the Fiscal Review committee (where most bills went if they had fiscal notes).  Judy does her homework and knew the contents of almost every bill, particularly education and labor, her specialty.  Judy spoke on most bills the end of the week and I tried to inquire of her at the microphone as often as I could. I am in awe of her knowledge and commitment to being on top of the fiscal process.  I could not do what she does.

Amidst all the “strangeness” of the session, two traditional election year GOP priorities failed to make it across the finish line = guns and abortion.

NO restrictive abortion bills passed, even though we had a flurry of them earlier in session.  NO harmful firearm bills passed, including the famed “Guns Everywhere” bill.  We did have a “pop-up” arming additional school staff amendment which was added to a major education bill the last week but the sponsoring Senator poo-poo’ed it during the final conference committee.  NO one knows his reasoning but his focus was on keeping his bill clean —we exhaled!  NO major voting restrictions bill passed because House Elections Committee was barely functional with bizarre proposals which the committee failed to take seriously. Whew!

I debated hard all session in favor of raising the age for child marriage as the amendment was added to numerous bills – and was finally successful.  Last year it passed the House unanimous but this session hard core conservatives rallied against it because of restricting parents rights (which made for very bizarre 1950’s era floor debate).

I also debated hard in favor of adding “Consent” Language to our  education statute for high schoolers.  It was successfully added by Sen. Jamilah Nasheed during Senate debate to HB1606 and passed the last days of session.  I was very pleased language was removed from the original bill which required students be taught to “resist” unwanted advances.

In addition, HB1288 passed which extended the sunset for fake crisis pregnancy center (CPC) tax credits to 2025 and upping their maximum to $3.5 million.  FACT: these centers have no state regulations, are not required to have medical staff, most are religiously affilitated and are not subject to HIPPA laws.  The American Medical Association states “CPC’s practice medicine without a license which is illegal, unethical and shocking”.

ALL TRULY AGREED & FINALLY PASSED BILLS (SEE ALL HERE) WERE DELIVERED TO THE GOVERNOR MAY 30th PER MO CONSTITUTION.

JUST IN:  GOV. GREITENS (at least he IS the governor until 5pm Friday, June 1st) ISSUED A STATEMENT AFTER SIGNING 77 BILLS earlier today:

“Our top priority has always been getting results for the people of Missouri, and our strong agenda has taken Missouri in a new and better direction. Today, I’m proud to put my name on many important laws and bold reforms.

We accomplished a lot this year. We passed the boldest reforms to Missouri’s foster care system in a generation, which the First Lady and so many worked hard for. We succeeded in delivering our tax cuts to create more jobs and higher pay for Missouri families. We passed critical efforts to shrink government by getting rid of useless political appointed positions, and we passed historic state workforce reforms to ensure that good service gets rewarded and that taxpayers get results. Our efforts to expand rural broadband were successful, and we signed bills creating greater access to health care for pregnant women, new benefits for veterans, protections for law enforcement officers from harassment, and expanded access to classes for kids.”

My Response: While most of the session was spent dealing with his indictments & investigations, Gov. Greitens punished pregnant women, restricted healthcare access, protected law enforcement at the expense of targeting minorities, issued tax cuts that only benefit corporations and the wealthy and so much more. His priority was protecting a punitive conservative agenda without regard for his traditional Jewish values he used to flaunt.

REVENGE  (HB 1558): Makes it a felony crime to disseminate or threaten to disseminate a explicit image of another person without their permission. FINAL HOUSE VOTE 138-0. I VOTED YES.

CHILD MARRIAGE (SB 655): Raises the minimum age for child to be married in Missouri without obtaining a court order from 15 to 16 and prohibits marriages between a person who is age 21 or older and a person who is age 16 or younger. FINAL HOUSE VOTE 135-3.  I VOTED YES.

RAISE THE AGE (SB 793): Changes the minimum age at which teenage defendants are automatically prosecuted as adults from 17 to 18. Seventeen-year-olds could still be certified by a court to stand trial as an adult in the case of certain serious offenses. FINAL HOUSE VOTE 139-4.  I VOTED YES.

OPIOID PRESCRIPTIONS (SB 826): Limits certain initial prescriptions of opioids to no more than a seven-day supply for the treatment of acute pain. FINAL HOUSE VOTE 128-5.  I VOTED YES.

SHACKLING PREGNANT WOMEN (SB 870): Prohibits the Missouri Department of Corrections from shackling a pregnant offender in her third trimester during transportation, medical appointments, labor or for 48 hours after delivery, except when the offender poses a substantial flight risk or is deemed a danger to herself or others. FINAL HOUSE VOTE 131-13. I VOTED YES.

PREVAILING WAGE (HB 1729): Prohibits contractors and subcontractors on public works projects from being required to pay workers the local prevailing wage under certain conditions. FINAL HOUSE VOTE 97-50. I VOTED NO.

INDIVIDUAL INCOME TAX (HB 2540): Cuts the individual income tax rate paid by most Missourians to 5.1 percent and makes up for some of the lost revenue by reducing how much federal tax Missourians can deduct from their state taxes and scaling back certain other tax breaks. The primary income tax rate currently stands at 5.9 percent and was already scheduled to drop to 5.5 percent under a 2014 law. FINAL HOUSE VOTE 101-40.  I VOTED NO.

STATE MERIT SYSTEM (SB 1007): Eliminates Missouri government’s merit employment system and makes most state workers at-will employees who can be fired at any time without cause. FINAL HOUSE VOTE 98-38.  I VOTED NO.

RIGHT-TO-WORK VOTE CHANGE (SCR 49): Moves the election date on a statutory proposition to adopt a so-called “right-to-work” law that would make it a crime punishable by jail time for an employer to negotiate a labor contract that requires workers to pay dues for the union representation they receive. Under the referendum petition forcing statewide a vote on the measure, which the GOP General Assembly enacted in 2017 and didn’t intend to go before voters, the vote was scheduled for the Nov. 6 general election. This measure moves it up to the lower-turnout Aug. 7 primary election. FINAL HOUSE VOTE 96-47.  I VOTED NO.

After nine years of serving in the House (I was first elected in a special election November 2009), it was a tiring but emotional last day of session. 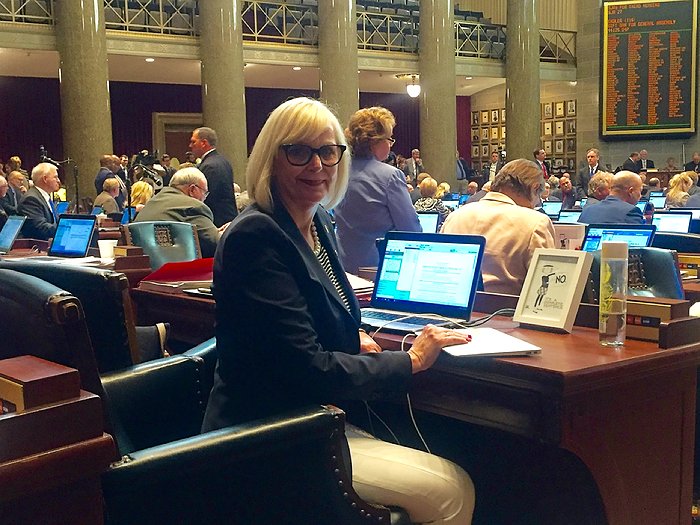 I was a bit verklempt as my husband Burt and daughter Sophie (a middle school counselor in Kansas City) were able to both join me in the Capitol. They were with me when I was sworn in on my first day in January 2010 and it meant the world they stood with me on my last day of regular session.

I am still processing all the emotions but it has been an absolute honor to be elected and serve 4.5 terms in the Missouri Legislature. 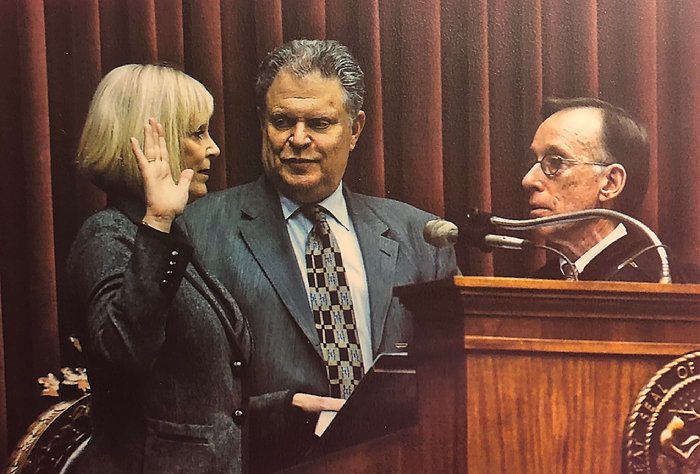 My very first oath of office administered by Appellate Judge Larry Mooney in January 2010 with Burt holding the Torah for me. Look how young we were. 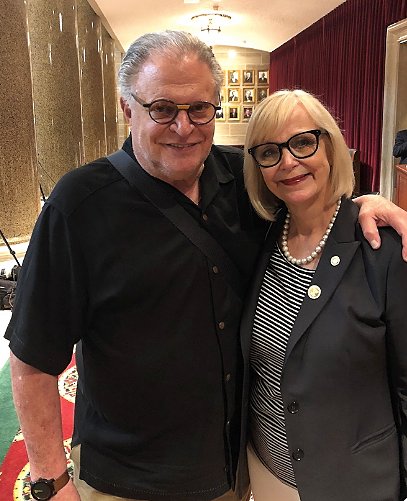 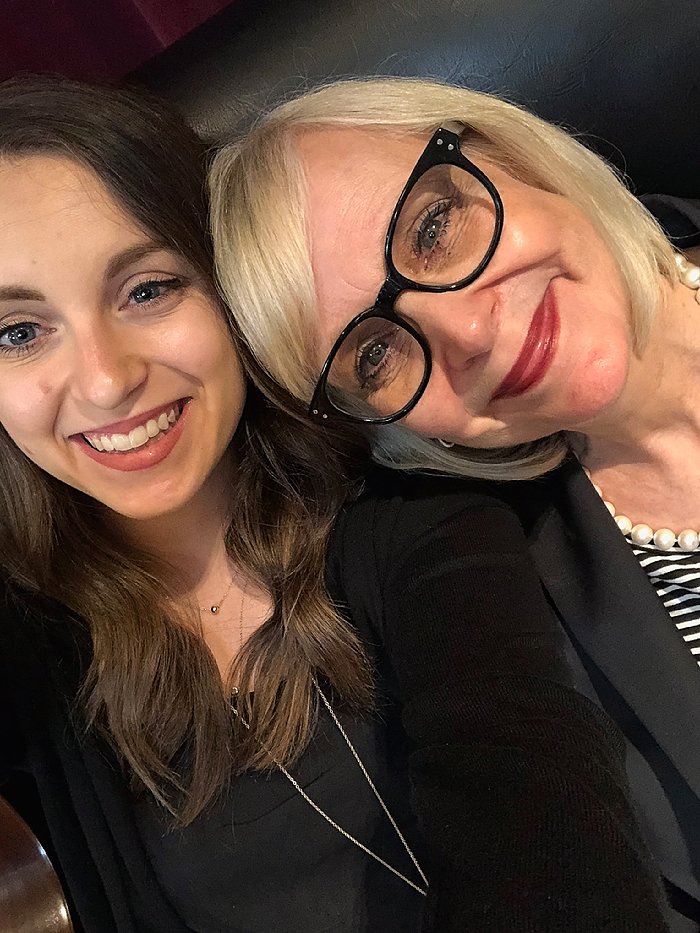 Burt and Sophie with me on my last day of regular session May 18, 2018, completing nine years in office. 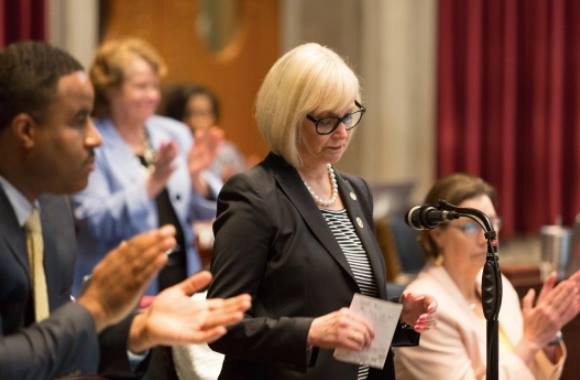 Thanking my family and the legislature body in emotional farewell remarks on the House floor. 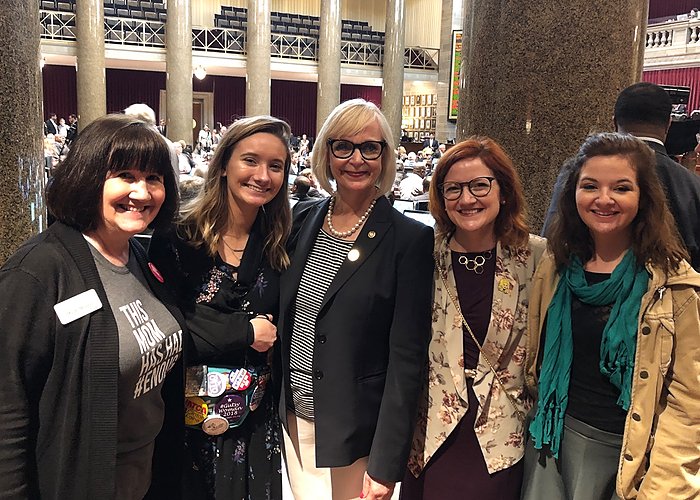 As a bonus, my mentee & recent Parkway Center High school graduate, Hannah Maurer (2nd from left) chose to celebrate her graduation and my last day in the Capitol with her mother Marti Barker Maurer and her sisters.

With the legislature tornado of bills and extreme late nights on the floor, it was fun to be with supporters and students anxious to be part of the process in the Capitol. 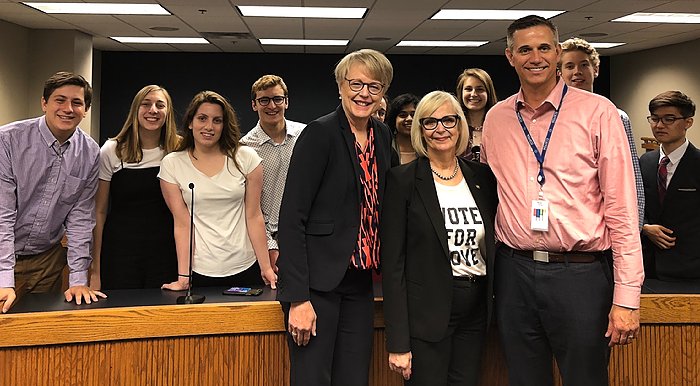 I always love when Ms. Debra Weins (beloved retiring Clayton High School AP Gov teacher) brings her students to the Capitol.  Above, her graduating seniors (with Ms. Weins & Asst. Principal Ryan Luhning quized me in a fabulous Q & A session in a hearing room.  It was full circle to be with graduating Matthew Bloom (far left) who previously lobbied me as a 4th grader! 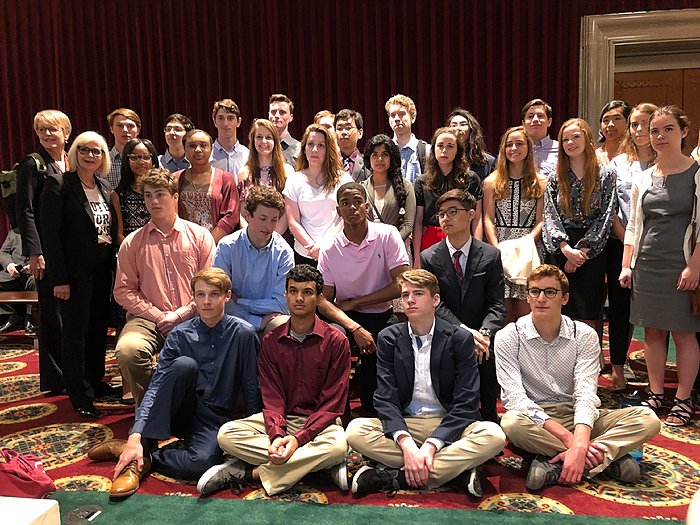 They may look glum but it was serious work getting everyone together on the side gallery for the House photographer after I introduced the Clayton High School AP Gov students on the House floor. 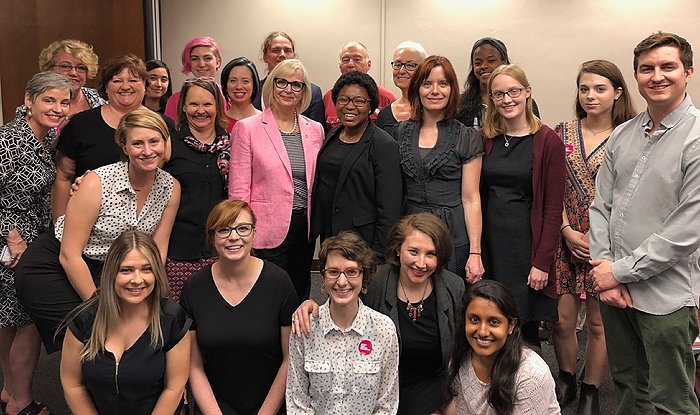 It always means a great deal to be with Planned Parenthood supporters when they come to the Capitol – even in the final days of session.  After nine years working with many of them who show up year after year, hearing after hearing, lobby day after lobby day, it was indeed special to give them encouragement and any wise words I had before I ran back up to the House floor to debate restrictive women’s health bills.  They don’t realize how much they’ve given ME. Their stories, their passion & their unwavering commitment to protecting women’s health fuels me.